Cookies help us to provide our services. By using our services, you hereby agree to our use of cookies. >Learn more Accept
Home » Current events

Always up to date 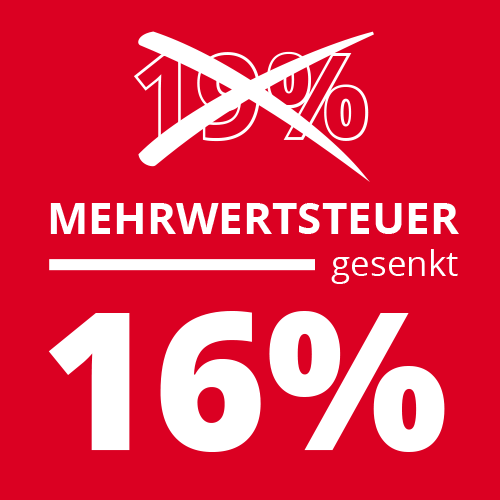 On 1 July, Germany’s value-added tax rate was cut from 19 percent to 16 percent. As part of this cut, our net prices will remain constant. But our gross prices will drop by nearly 3 percent. This is great news for all private customers and clubs that are not entitled to an input tax deduction and that will profit from the entire tax cut!

For our business customers, the value-added tax is treated in accounting terms as a transitory item, the amount of which has no impact on operating results. They can continue to count on stable net prices. 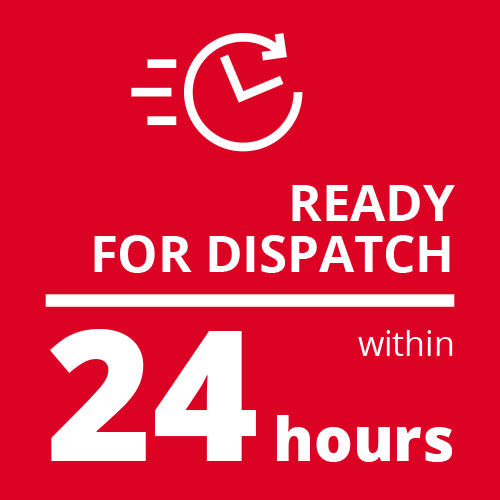 Many products ready for dispatch within 24 hours!

You’ve probably already noticed: For some weeks now, several of our product categories have been given a special designation. These products are shipped within 24 hours after receiving your order. The amount of time the shipping company needs for the delivery depends on several factors. But the bottom line is this: These products will reach you much faster than before.

Making this possible is the massive expansion of our production and storage capacities that we had pushed ahead with previously. And these efforts are continuing to make significant progress: We’ll be putting an additional production hall into operation in the near future, and we’ve begun construction of a high-performance logistics centre on our premises.

We’re already able to produce many very popular products to have in stock when you place your order so you’ll receive your AUER containers as soon as possible. And we’re continuously adding more product categories and models to our 24-hour range! 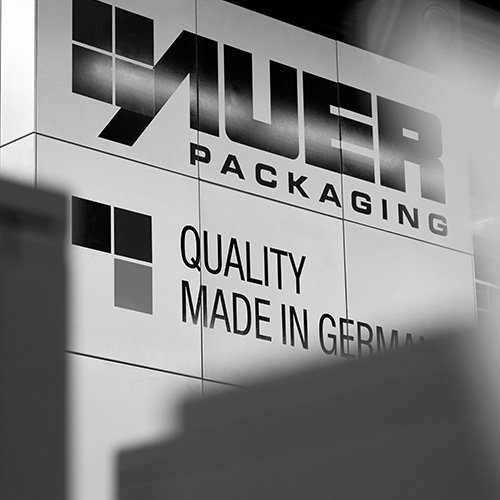 Coronavirus: what customers of AUER Packaging need to know now

AUER Packaging has been able to proceed with the daily business under the current circumstances.

Please note that the present situation can change quickly. In case of any news or changes with regards to the daily business, we will try to inform you ASAP.

For decades, the name Rolls-Royce has been synonymous with extremely high-quality products. We are therefore particularly honoured that the British company has chosen us to supply it with high-quality plastic containers. Rolls-Royce not only manufactures exclusive cars but also aircraft engines. An order was placed in December for this business area which was primarily for Euro containers with hinge lids and solid (closed) big boxes. Thanks to their automation-friendly design, our containers meet the high standards of this renowned long-established manufacturer and its requirements in terms of modern and efficient intralogistics. 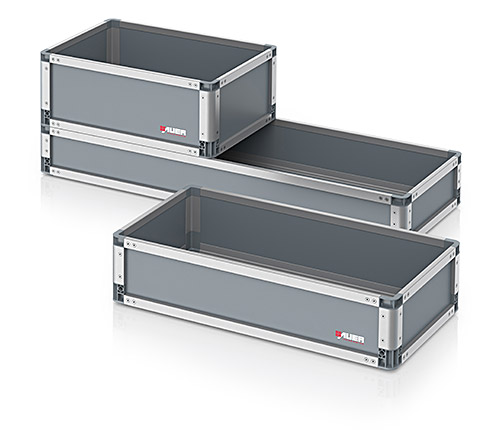 We will be arriving at the trade fair event of the year, FachPack in Nuremberg, with three innovative product developments to showcase. Firstly, customers will soon be able to enjoy a lot more flexibility when it comes to tool boxes. In the future they will be able to freely configure the three slots for the tool box racks themselves from 19 different options. This is all thanks to a configurator in the online store. The choice ranges from empty drawers and unloaded assortment boxes to loaded versions with various different combinations of insertable bins right through to sets with high-quality tools from high-end brand Garant. And thanks to full insulation from EPP foam, the tool box can now also be ordered as a passive cool and warm box.

The second and probably biggest innovative development which we will be unveiling to the audience at FachPack for the very first time, however, is the custom-sized containers. This means that, for the first time ever, AUER customers are completely free to decide what dimensions their containers should have. We can custom-make them for special applications based on customers’ wishes with the minimum dimensions being 18 cm x 18 cm x 17 cm and can make them for an astoundingly reasonable price! There are no upper limits, so long as the statics play along. The online configurator is also to thank here – customers can use it to configure their dream containers and order them with the perfect dimensions, right down to the very millimetre. 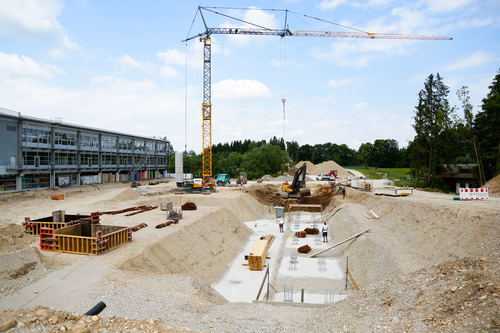 We are continuing to invest in the Amerang site: in summer 2019 the go-ahead was given for work to commence on the construction of a third production hall at our approx. 50,000 m2 premises. From an architectural point of view, it will be designed and constructed in the same way as the other two existing production halls and will also boast approx. 3,000 m2 of floorspace. A total of 14 injection moulding machines were ordered in June 2019, six of which will be added to the fleet in production hall 2. The remaining eight machines will be put to work in the new production hall 3 as from February 2020. Two of the new injection moulding machines have a clamping force of 45,000 kN, which is equivalent to a pressure of 4,500 tonnes. The largest injection moulding machine measures 24 m x 5 m x 4 m and therefore occupies almost the entire width of the hall. Machines of this magnitude will enable us to also manufacture large products, such as our large load carriers and pallets, on site at our technology park for the first time ever. The hall is scheduled to be completed in December 2019. 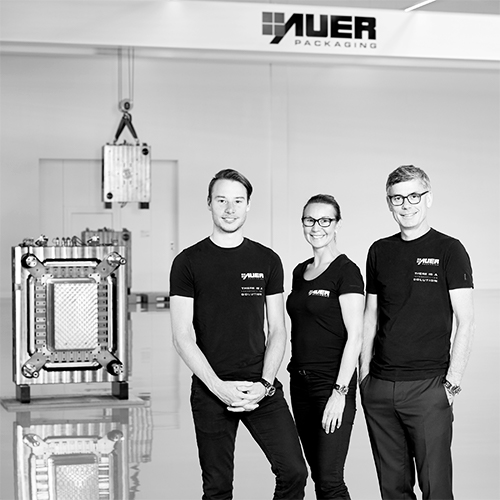 Record turnover, new investments and additions to the leadership team

In the last financial year, for the first time ever in the company’s history, AUER Packaging’s total turnover exceeded the magical number of EUR 100 million. This is an impressive increase of 23.5% compared to the previous year. What's more, the company is optimistic about 2019 too.

One of the reasons for this is a huge order from Volkswagen AG. It is the largest single order that AUER Packaging has ever received. As part of the agreement, all plants Europe-wide across the entire VW Group will be supplied with AUER containers.

A lot is happening on the investment front too as a new warehouse is currently being built at the Amerang site. It will increase storage capacity in the future by an extra 6,300 m2 of usable floorspace. As from spring 2019, eight lorries will be able to be loaded and unloaded at the same time at numerous loading bays there. Plans are currently under way for a third production hall as well as injection moulding machines. In addition, seven injection moulding machines, which have recently been delivered, are currently being set up and will significantly increase production volume of Euro and KLT containers when they come on stream in mid-March.

For the first time ever, our trade fair team ventured into wintry Russia at the start of 2019: Upakovka, an international trade fair for packaging materials, packaging machines and machines for the production of packaging, was held in Moscow from 29 January to 01 February. “Ded Moroz” (“Grandfather Frost”) lived up to his name greeting us with temperatures as low as -15°C, icy winds and plenty of snow. Yet despite the wintry conditions and the language barrier, the trade fair experiment, in what was new territory for us, was a real success. The signs did look good from the beginning though anyway: the event organiser was expecting a total of around 25,000 trade visitors over an exhibition floorspace spanning more than 70,000 m2 spread over eight halls. The trade fair has been going since 1979 and this year more than 250 exhibitors from 22 countries signed up. We were able to make lots of new promising contacts at our 200-m2 stand. 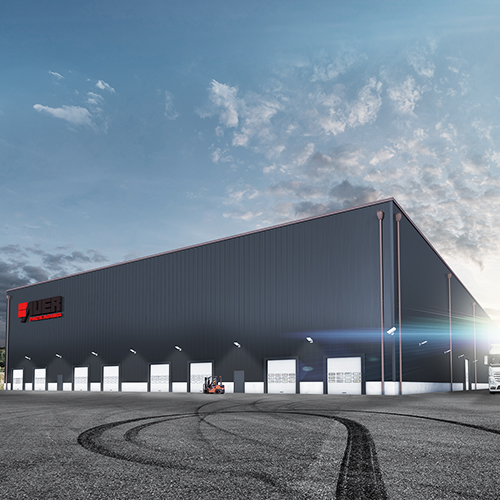 The construction of the new warehouse at our Amerang site is coming along nicely. The concrete foundations have already been laid and work has already begun on constructing the building’s shell. The new warehouse will increase Auer’s storage capacity by an extra 6,300 m2 of usable floorspace. In the future, the products manufactured on site will be temporarily stored in the warehouse prior to being shipped. The impressive dimensions mean that the company's logistics needs will be met for several years to come: once all the work has been completed, eight lorries will be able to be loaded and unloaded at the same time at several loading bays. The investment involved amounts to approximately EUR 7 million. According to the schedule, the building’s shell will be completed by December 2018, and the first lorries loaded with goods should start rolling out in spring 2019. 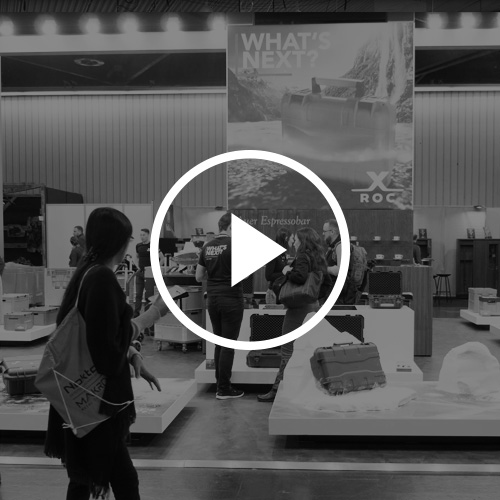 The new XROC protective cases, which were launched this year, were the main focus of our stand at Photokina 2018 in Cologne. Our protective cases and trolleys are ideal for professional and amateur photographers who own high-quality cameras with interchangeable lenses and/or video equipment. The products proved to be extremely popular since they are exceptional value for money and fill a real gap in the market. Photokina, which we attended for the first time ever this year, also gave us the opportunity to showcase a selection of other containers which all photography enthusiasts are also sure to find extremely useful – for example for storing studio equipment and small components.

Configure your chosen item entirely in line with your needs:

Select the required colour for the individual components of the item.

You are currently placing orders as a business customer. All prices in the private customer shop include VAT. All purchases are covered by a 14-day right-of-return policy.

Place orders as a private customer